USDJPY is testing again the 8 year trendline (see the chart below). Is it ready to break it? I would say it is, because of two reasons:

1. It is still one of the best carry trades, the difference between the Bank of Japan interest rate (0.25%) and the FED rate (5.25%) being 5%. The Bank of Japan has just started to increase rates by 0.25% a couple of months ago after more than 6 years while the Fed has just stopped hiking after 17 consecutive 0.25% measured-paced increases. Still, this doesn't seem to stop investors from borrowing money at 5% discount!:) 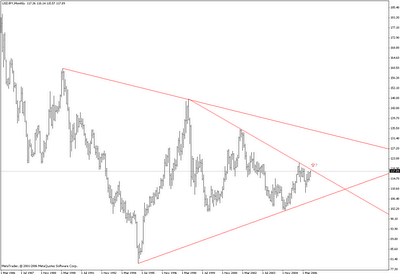 2. The Yen is heavily sold against the Euro, while the interest rate differential is 2.75% and it's likely to see it widening since ECB is to hike more aggressively than BOJ due to inflationary pressures. Moreover, in the EURJPY monthly chart below we can notice that a 14 year trendline was vigorously broken last month and the strong bullish trend started 6 years ago still has room to run. Anyway, EURJPY had only one correction week last week following a 15 week bull run and its speed may slow a bit in the near future, but the lead in selling the Yen may be taken by USDJPY next. 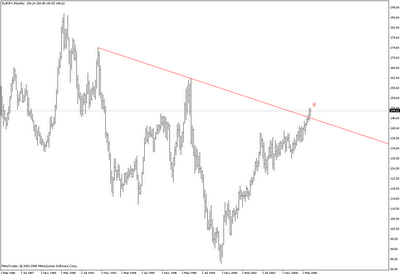 Email ThisBlogThis!Share to TwitterShare to FacebookShare to Pinterest
Labels: Currencies