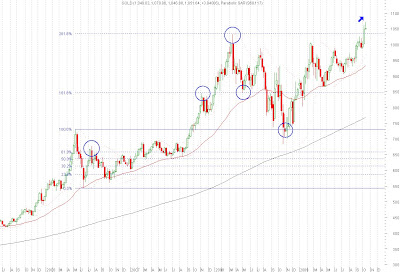 In the next weekly chart above we see the deep correction of the 2006 (from 730 to 543) with the first bounce towards the 61.8% retracement (around 660). Then, after the bull market took out the 660 retracement, we see each Fibonacci extension (161.8% around 845 and 261.8% around 1032) consecutively reached in the next two years. We also notice how the gold market pauses at each of the important Fibonacci levels in the 2008 correction before going higher.
Before going to the third weekly chart below, I will quote from an article written by Mukul Pal, CEO of Orpheus Capitals, a global alternative research firm entitled The Gold Cycle:
"The 34 year gold cycle guides liquidity flow from equity to gold, as money shifts from paper to hard assets.Peter Cogan mentioned about the Gold crisis cycle of 34 years in his article on predetermined periodic cycles of optimism and pessimism. The 1967-68 Gold crises, which climaxed with the end of Bretton Woods system followed the 1933-34 Gold crisis. The article written in 1969 issue of CYCLES was visionary and is the only reference in nearly 70 years of CYCLE literature. But the more interesting part is that the CYCLE is still valid and working. After the gold crisis of 1967-68 we saw the crisis of 2000, where people believed in technology stocks and the paper dreams they offered compared to the hard asset."
Based on the 34 year gold cycle mentioned in the excerpt above and on the assumption that markets behave the same in lower time frame cycles, in the weekly chart below I divided the last almost 10 years of bull market in 34 weekly cycles starting from the 2006 highs. We notice that around each cycle we have inflection areas either in the form of a new high or of a correction low or just an inflection area that sets off a strong move.
Since Gold has jus broken out to new highs we may look for the next target levels according to the Fibonacci extensions/projections of the last correction in 2008. These levels are 1250 (161.8% Fibonacci projection) then around 1400 (the 200% projection) and 1600 (261.8% Fibonacci projection). We also have the 34-week cycles in April 2010 and November - December 2010 when we may record new highs around the levels above or just inflection areas. 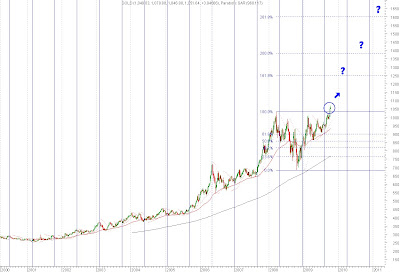 And by the way, 34 is also a Fibonacci number (13+21)! :)
Now let's see if the assumptions regarding the patterns explained in this post prove to be true.
Posted by Florin TOTH at 8:42 PM No comments: