Goldilocks economy seems to be over and the Bear family is heading back home! 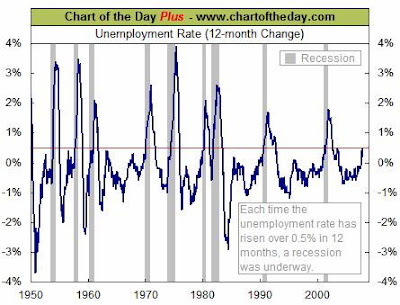 The Bureau of Labor Statistics report on employment came out with bad news on Friday. The job creation slowed down somehow more than expected (18.000 jobs versus 70.000 jobs expected) though these numbers are sometimes fundamentally revised the next month and are not so much reliable in my opinion despite the huge importance markets give them. Nevertheless, unemployment rose to 5%, up from 4.4% last February, and 4.7% last month. "Rises of that magnitude are rare (see picture above); it's 1.6 standard deviations from the mean, and at the 92nd percentile of monthly changes since 1950. They're even rarer outside recessions; of the 55 rises of 0.3 point or more, just 18 have been in expansions, and most of those were either close to recessions or in jobless recoveries. In fact, the last time we saw a 0.3 point rise was in January 2001, two months before the official cycle peak. More than half the rise in unemployment came from permanent job losers." (Philippa Dunne from The Liscio Report).
The awful BLS report coupled with the dip in ISM manufacturing index below 50 (though this number is just a conventional line in the sand, it needs to stay longer and lower below 50 to give strong signal of recession) give the markets the sentiment recession is on its way in the US (and the three bears - the Bear market - from Grimm Brothers tale are heading back home to disturb Goldilocks sleep and eat their porridge putting an end to the "just right" economy) while the FED prepares another rate cut.

Nevertheless, economists and international analysts predict a recovery starting the second half of 2008. The timing is just right for the November American presidential elections that can provide good support to the stock market throughout this year.
Looking at the carts we see DJIA Index approaching key support around 12.700 points in a rather trendless price action (as indicated by ADX readings). The failure of this strong support gives scope for next support around 12.000 points and may start building a downward bearish channel for the next several months. If 12.700 points support holds (backed by oversold Stochastic readings), we may see a bounce towards the SMA200 and EMA50 in a range driven price action also supported by the end of the month most probable at least 0.25% FED rate cut. If bearish sentiment is strenghend, any bounce will probably stop short of the high of the previous bounce.
Sources:
John Mauldin - Thoughts from the Frontline
Barry Ritholtz - The Big Picture
Posted by Florin TOTH at 8:48 PM

Email ThisBlogThis!Share to TwitterShare to FacebookShare to Pinterest
Labels: Chart of the Day, Equities, Macroeconomics, Trading